Symfony Demo doesn’t require so many PHP extensions. A file named Dockerfile in docker/php. Yaml up -d Creating network 'dockerdefault' with the default driver Creating dockermongodb1. I just looked into the issue and noticed that the “mongo” extension does not work with PHP 7 any more. The newer “mongodb” extension OTOH is not supported by Adminer.

As web developer I always have to deal with the fact that every project has its own dependencies and requirements. At application level a good dependency management tool does the job (as PHP developer I love Composer) but a web project has not only application dependencies, there are also system/infrastructure requirements. On the production or test environment we can setup project’s specific dependencies because these environments are often dedicated to that project but this may not be true for local development environment. This is especially true for me because I have to deal with many different projects.

Anyway, until few days ago, I always developed my applications with the classic LAMP stack running directly on my local (and phisical) machine. In the past I tried Vagrant but then I always come back to my local machine. Why? Because I always wanted to use my host’s IDE to edit project source files but run applications inside a virtual machine and keep source files on the host machine it’s not as easy as it seems. One of the most commonly used approach is to have the project’s directory on the host system mounted inside the virtual machine. This is, for example, the standard approach for Vagrant which mounts current working directory of the host in /vagrant path of the virtual machine. I always found that this approach has performance issues because the mounted file system is very slow even with an NFS mount. This is especially true for PHP which does much filesystem access for class loading. Besides this a virtual machine for each projects requires much disk space. So, as I said, I always come back to my local machine.

But things changes and few days ago I decided to take time to find a good solution that allows to have different development environments, each one specific for each project. Why now? Because on these days many different technologies are changing in the PHP world (Magento 2, Symfony 3, Drupal 8 and PHP 7 to say some of them) and I want to be able to work on these amazing new technologies while continuing to support old legacy projects.

So I decided to try Docker and I want to share my experience in this blog post.

What is Docker? Let’s take its definition on the official Docker website:

Docker allows you to package an application with all of its dependencies into a standardized unit for software development.

Docker containers wrap up a piece of software in a complete filesystem that contains everything it needs to run: code, runtime, system tools, system libraries – anything you can install on a server. This guarantees that it will always run the same, regardless of the environment it is running in.

Starting from its definition it seems perfect! It isn’t?

Docker is available for Linux, Mac OS X and Windows but because is based on Linux kernel features it requires a Linux virtual machine in Mac OS X and Windows. I work on a Mac Book Pro so is this the case for me and I have to download a package called Docker Toolbox which installs different components including Oracle VM Virtual Box that is used by Docker to run a Linux virtual machine where Docker directly runs.

Basically Docker allows to run several isolated containers. You can think a container like as a virtual machine even if it isn’t a virtual machine. Containers can be built from scratch or from a base Docker image. You can think an image as a VM snapshot. Images can be found on a central public repository called Docker Hub. Here you can find many images developed by the community; there are also official images, provided by Docker, for mostly used technologies.Containers can also be built from a local Dockerfile which contains directives on how to build the container.

I’m a PHP web developer so I need a PHP container to run my applications and I also need a web server. Even if, with Docker, I could use two different containers I prefer, for semplicity, to use a single container with Apache and PHP together. This is a very simple solution because on Docker Hub there’s the official PHP image with Apache ready to use.Unfortunately this is only a basic image, for example it misses most commonly used PHP extensions like gd, mysql or xdebug. So I decided to build my own image starting from the official PHP-Apache image. The result is the webgriffe/php-apache-base image, available on Docker Hub, which we use in Webgriffe® as base image for development of PHP projects. We support PHP 5.5, 5.6 and 7; for more information about features of this image have a look at the repository’s readme.So, for example, I can run the container image with the following command:

The -p option allows to map a port of the host to a port of the container. As you know Apache, by default, exposes port 80 so with -p 80:80 I can connect to port 80 of my host and “see” Apache running on the container.Thanks to the Dockerfile I can also build a custom container for a project with specific needs. For example, if in another project I need PHP 5.5 and the PHP mongodb extension then I can place a Dockerfile in my project directory with something like this:

Then I can build the container from the Dockerfile (assuming it’s in the current working directory):

Developing PHP applications doesn’t consist only into running it from Apache but also from running it from command line. I may also need to run automated tests or install dependencies with Composer. When I need to do this, with Docker I can easily access to the PHP-Apache container through SSH:

And then run commands inside the development environment:

Project source files on the container

As you may notice, this isolation isn’t indicated for development purposes because I would like to edit project source files on my host system and then immediately run that change on the Docker container.Fortunately Docker has a data volume feature which allows to mount an host folder inside the container. For example, given that the current working directory is /path/to/my/project I can run: 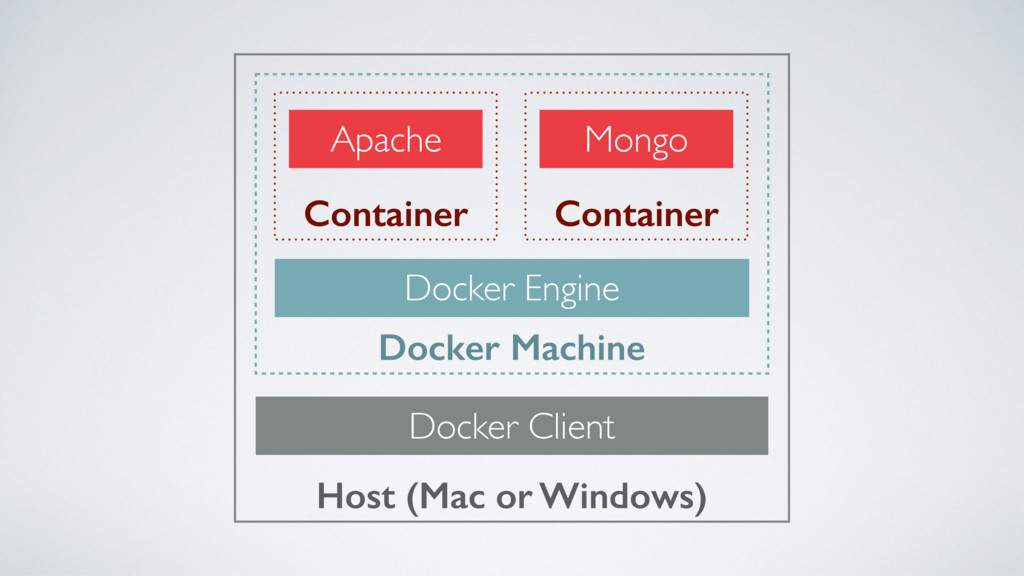 As said before, on OS X Docker runs on a Oracle VirtualBox Linux virtual machine (also known as docker machine). To make work the data volume feature the docker machine mounts the user’s home directory from the host to the docker machine itself. This mount is done through the vboxsf which is terribly slow! I think that performances are important even for development environments because allows people to be more productive. With this setup I found that a Magento 1.x application running on Docker was over 10 times slower than the same application running on my host. So I decided to keep searching a more performant solution.

First I tried dinghy which is basically an alternative docker machine but with an NFS mount instead of vboxsf. NFS is much faster so, with dinghy, things have improved a lot (4/5 times slower than host) but it wasn’t enough for me because I didn’t want a performance loss by switching to Docker as dev environment.

So I finally found Docker Unison which is a two-way fast file sync system. Apple tv download macbook pro. Basically I have to start a special Docker container which runs the Unison server:

Then I have to run the Unison client command from the project directory of my host so files will be synced to the /unison path of the Unison server Docker container:

Also notice that Unison is two-way sync, so not only host changes will be pushed to Docker but also the viceversa. This is important because many frameworks have code generation features while running so I want back this files to my host to better read code and debug during development.Then I can use the --volumes-from feature of Docker to mount the /unison path of Unison container as a volume inside the docker container which runs the application.

Et voilà! I have a PHP-Apache container with project files continuously synchronized with my host. With this setup I have the same performances of my host and this is great!

MySQL and so I can quickly run commands inside my Docker application container with $ dar <command>. The volume mappings ~/.composer:/root/.composer and ~/.ssh:/root/.ssh allows Composer and SSH to successfully authenticate with credentials and keys from my host machine.

With this docker-compose.yml file I can run a single command:

And all the containers are automatically created and started. Then I have to start file sync with Unison (replacing <docker> with my docker machine IP address):

So, let’s recap. With Docker I can start my project-specific development environment at any time, I can edit project files on my host and immediately see the change. I can also run commands inside my application container so I can run automated tests, static code analysis tools and, of course, CLI applications. Last but not least I can continously improve Docker development environment images like webgriffe/php-apache-base and webgriffe/magento1-dev using GIT versioning and Docker Automated Builds. Not bad!