Synology Docker Background Info. In 2019, I moved from an HTPC NAS Combo server to separate Intel NUC Home Server and Synology NAS. Read: Moving from a Home Server to NAS (Synology) – The why, learnings, and tips. How to Update Docker Compose Containers on a Synology NAS Updating a container using Docker Compose is slightly different than running Synology’s GUI. When we use Synology’s GUI and duplicate the settings, we are technically creating an entirely new container and keeping our old one as well.

A lightweight software containerization solution powered by Docker Inc. By leveraging this cutting-edge technology, Synology delivers even more packages for seamless deployment on your NAS, such as Redmine or GitLab.

Docker is a lightweight virtualization application that gives you the ability to run thousands of containers created by developers from all over the world on DSM. The hugely popular built-in image repository, Docker Hub, allows you to find shared applications from other talented developers.

Deploy Docker containers at will and facilitate the maximum utilization of your Synology NAS.

The built-in Docker®Mac os leopard dmg. Hub Registry enables you to directly search for thousands of applications from developers around the world.

The overview provides a clear dashboard including the NAS CPU, memory and individual container resource usage.

I use homeassistant to control my apartment’s lighting and some other fun things like the tea kettle. I definitely recommend it; it’s open-source and very easy to set up, and it supports many devices right away with minimal fuss. I’ll go into more detail on my home automation devices in another post. This one is about the software, and the surprising complexity of home networks.

Many people run homeassistant on a Raspberry Pi, but I already had a Synology DS218+ NAS (network-attached storage) device that I wanted to use for home automation, too. It’s a suprisingly capable little Linux server, and since it’s always running anyway for network backups, it’s a good candidate for a home automation server.

In this blog post I want to explain some of the challenges of setting up a cluster of applications on the NAS and how I eventually decided to do it.

The NAS is a computer like any other, so one option for setting up additional apps on it is to install them normally and let them control the NAS’s available ports to talk to the local network. However, installing applications one-by-one like you might on a personal computer has a few downsides:

Instead of installing the apps individually, I committed to using Docker to run each app in its own container. Docker is useful in a professional software environment for isolating applications from their host operating system and managing their dependencies, but it’s also amazing for personal projects, because it allows the developer to completely describe how an application should be configured so that the setup is reproducible later. It’s very easy to forget how a personal project works, so I really value the self-documenting nature of docker containers.

Okay, there’s a catch—surely you knew there would be!

The Synology NAS runs its own web server, listening on ports 80 and 443 (the defaults for HTTP and HTTPS). While it is possible to free those two ports, doing so involves editing the default nginx configuration files for the NAS to move its web applications to other default ports, and those changes might not persist across OS updates. Furthermore, changes to the default ports make the NAS more annoying to use for its original purpose, and might break features that the Synology developers add later on.

I wanted to preserve the original functionality of the NAS, so I opted not to mess with the default ports. I assumed there must be a better way, and this blog post documents some of them.

In this configuration, Docker provides isolation from the host operating system and keeps other ports on the container closed to traffic, and we still get the dependency management and reproducible setup of Docker containers, but we aren’t taking advantage of any virtual networking features.

With homeassistant running and the goal of making it available on its own URL, the next step is to add a reverse proxy to route traffic at this new URL to the actual port 8123. A reverse proxy intercepts traffic on the host machine and can route it to different applications based on properties of the traffic like the URL, the port, or the protocol.

This diagram shows how other services could use additional ports on the host, but I only configured homeassistant to run this way.

Here is the nginx config I used to set it up.

This nginx configuration declares one server listening on port 80, passing all traffic to http://localhost:$target_port. The target port comes from the mapping declared above, based on the name of the service. For the case of homeassistant, homeassistant.nas.ivy.travisgeis.com will provide a $name of “homeassistant,” which will map to port 8123.

This nginx reverse proxy works well for simple services like homeassistant that run on the host’s network and need to expose one or a handful of ports. However, it doesn’t work for services that need to listen to non-http network traffic, like a DNS server. My next project was to set up pihole, a DNS server and ad blocker, so I was back on the hunt for a way to have multiple apps running on the NAS seamlessly.

One caveat for running nginx this way on the NAS: Synology provides its own default nginx configuration, and nginx runs on the NAS to host the buit-in web interfaces. In order for this copy of nginx to bind to port 80, I had to stop the already-running default instance. Here is a good guide on managing built-in services with Synology’s package system, “synopackagectl”.

Aside: Running nginx in a container

Because the NAS already had a global nginx configuration for serving its own web interface, I wanted to run a separate copy of nginx in a container. Running my copy in a container keeps my configuration isolated from the global configs, and provides the usual ease of building that containers allow.

While I was researching running nginx in a container, I happened across Nginx Proxy Manager. It provides a graphical interface for configuring reverse-proxy settings for different services, further reducing the risk of completely forgetting how everything works. 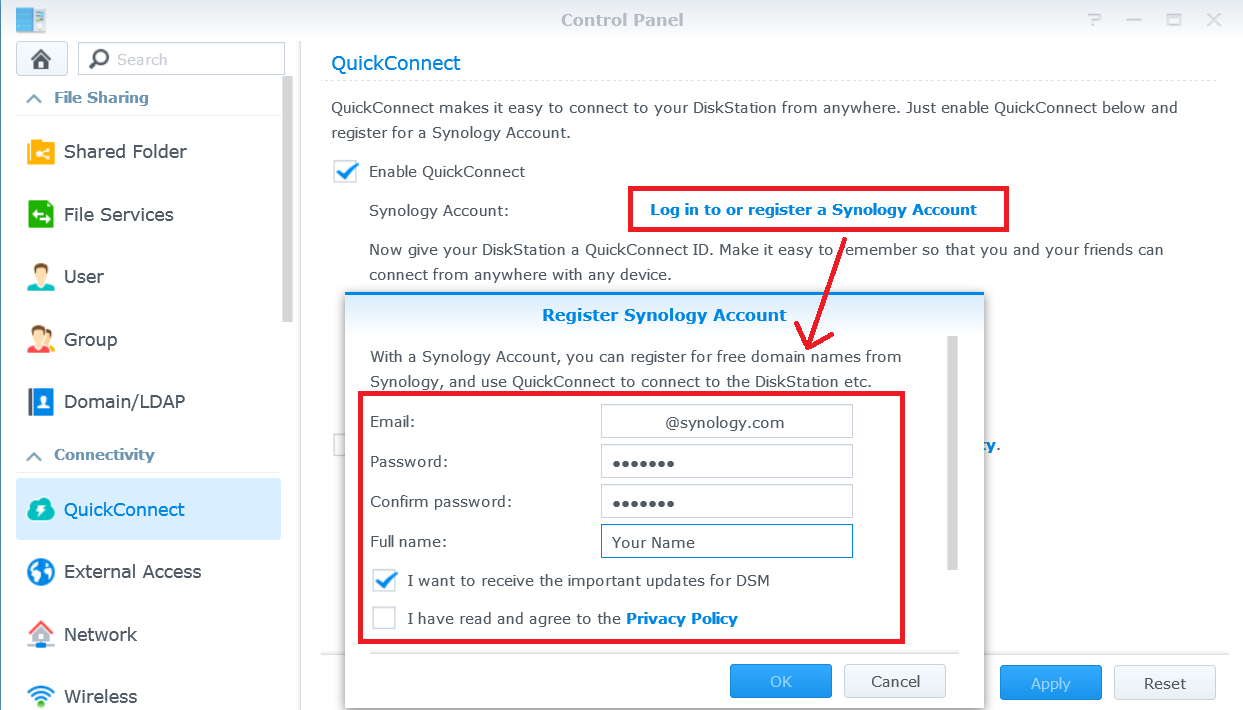 Next I wanted to set up pihole for LAN-wide ad blocking. pihole is a bit different from homeassistant, because it requires access to DNS queries, which don’t (usually) happen over HTTP.

Pihole expects to run on the LAN at a static IP on a dedicated host. To get it running in Docker, I needed to emulate a separate host within the Synology NAS.

Docker has a networking driver called macvlan that allows each container to have its own (virtualized) MAC address and IP address on the LAN. Perfect for the pihole! Thanks to Tony Lawrence for his excellent guide on setting up macvlan, which I adapted for this setup.

Using macvlan results in a pretty different network topology than using the host-mode network recommended for homeassistant. Each container on the macvlan network gets a unique IP address and MAC address on the LAN, and the macvlan network is isolated from the host. Basically you get extra virtual hosts from one computer!

Here are the basic steps required to transition the containers to a macvlan network:

Here’s a diagram of the macvlan network topology:

Each container gets its own MAC address and IP address, and each containerized application thinks it’s on its own host computer. We know the container IP addresses won’t collide with the DHCP-assigned network addresses because we’ve allocated different ranges for them. Below, I will detail each step for this setup.

Create the macvlan network in Docker

I manage all the Docker containers with Docker compose, but they need to share a single macvlan network so they can communicate with each other. There is no easy way to create a shared network in Docker Compose, so I create one with the Docker CLI:

Reserve Docker IPs and route to them

These commands add a link network called “macvlan” to the NAS network configuration. This part was really hard to get right, because it’s right at the edge of my understanding of Linux networking. The second line attaches the new link to a range of IP addresses starting at 192.168.0.101, the third line starts it up, and the fourth line routes packets addresses to IP addresses 192.168.0.200-192.168.0.207 to the new link, which means they will end up available to the Docker containers.

Attach the containers to the network in docker-compose files

Finally, now that we have the “vlan” network, we need to specify that each container should attach to it. Add this “networks” config to docker-compose.yml:

Check out the project on GitHub for the full configuration.